Looking for a half wit Whit

Arriving just too late for inclusion in last week's blog entry, was this fine photo of one of our firemen (name withheld to protect the guilty) suffering from what can most charitably be described as a 'wardrobe malfunction'.
We seem to have acquired a cat.  It has the dolly to go onto the parlour road to access the ash pit, but it didn't seem to be too interested in that. 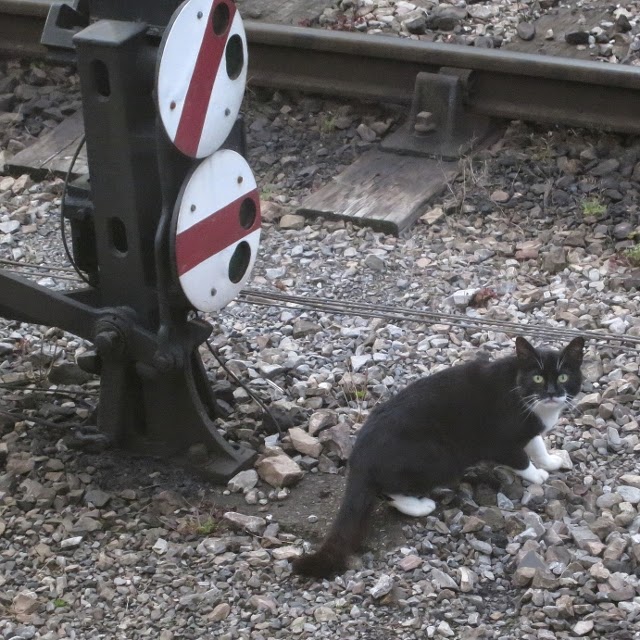 The forecast for Saturday was for torrential rain, thunder and lightning.  I was pleasantly surprised when I arrived at Toddington that it wasn't actually raining yet, but dark skies in the direction of Cheltenham suggested that it soon would be.   The best course of action was to crack on with cleaning as much as possible of my allotted loco, 4270 before the deluge commenced.   Mercifully she was still looking pretty smart, so I managed to get her looking quite presentable in fairly short order.
It was a little surreal at times, thunder and lightning, accompanied by some heavy rain was only a short distance away, yet Toddington remained dry until both of the day's locos were prepared and ready to go off shed.  Being perched up on top of the boiler cleaning the safety valve cover probably wasn't the best place to be as an electrical storm approaches, I was glad to get down from up there.

Whilst oiling up, Steve spotted that the steam lance cock had lost a nut and was a bit loose, which would result in a loss of the seal in the smoke box and potentially affect the steaming of the loco.  He asked me to rummage up a replacement half wit Whit nut for him.  I found the location that they should have been hiding in, but it turns out that we had none left.  A complete replacement nut and bolt, quite possibly metric  (I expect 4270 will reject it) was sourced to replace it with.
Once 4270 had set off for her day's work, I had a quick look in the David Page shed.  35006 is now on road 9 (giving easy access to one of the pits) and more work is taking place:

The tender brakes is one of the outstanding tasks, it was good to see that some of the tender's brake assembly was now being prepared for fitting:
The cab windows have yet to be fitted, Dave was getting on with the job of glazing them:
Left over from last week, was the job of lifting the coconut matting from the car park field.  Getting the pins in to hold the matting down had been relatively easy, getting them out again was not.
We didn't quite get the last section of the coconut matting lifted before the heavens opened.  Ben, Ed and myself all tried to squeeze into the cab of the fork lift truck (FLT) to escape from the deluge.  It's a space made for one, three was definitely a crowd!
A temporary respite, just long enough to tempt us out of the FLT was quickly followed by another deluge.  This time, Ed took shelter as best he could in the tree line.  The FLT was now less cramped and I suspect that Ben & I were staying much drier than Ed was:
The FLT was far from perfect though, the doors are ill fitting and the cab roof leaks:
The coconut matting had been down for long enough for grass to start growing through the gaps, so rolling it up took a fair bit of effort.  It didn't help that every now and again we discovered a pin or two that we hadn't removed first.
During yet another downpour, Ed and I sheltered under the water tower.  Ed did a spot of weeding whilst we were there, he even identified what kind of weeds they were as he pulled them out.
Finally we got the very last one rolled up and in the bucket of the FLT for removal back to the main car park.  They fitted neatly into the FLT's bucket, but only of you managed to roll them up straight. Get them slightly out of line and they didn't.
Cleaning them up was next, the plan was to unroll each one of the 5 pieces of matting over the ash pit and give them a thorough going over with the pressure washer:
Difficulties with attaching the hose to the pressure washer (a dodgy jubilee clip meant that the hose keep detaching itself) led to Ben and Tina trying to clean the matting with just a hose pipe and brush, with what can best be described as 'limited success'.
Finally, when a fresh jubilee clip had been found, Tina was able to do the job properly with the pressure washer.  She's dangerous with that thing, I was just one of several people that she managed to spray with it.  Not that I was really bothered, by then I was still soaking wet from being caught in the rain while we were getting the matting out of the field.
The rag collecting point continues to do a great job.  Thank you to all who have contributed.  I had noticed that it was full again when I arrived, but I had thus far neglected to empty it.  Paul turned up with a bag of rags to put in it and complained about it being full.

George decided to check out the items that Paul had brought along.  A theme started to emerge, most of Paul's cast off t-shirts were advertising various brands of real ale:

Taking the hint, I fetched up a wheel barrow and emptied the bin into it and took them off to the oil store.
Back in the David Page shed, John and a small team of people were re-shaping the eyes on some of Foremarke Hall's break rods.  To the untutored eye, the process seemed to involve heating them until they turned a cherry red colour and then bashing them about with a big hammer on an anvil.  I'm sure that it was rather more scientific than that though.
We're getting ready for another pour of concrete in the David Page shed.  Putting the steel meshing in place and tying it together in readiness for the next pour was on Saturday's list of jobs:
Preparing for the concrete pour finished, I returned to the mess coach to find that Ben had been having a spot of bother.  The water pump in the ash pit had stopped working, probably clogged up with mud from the coconut matting.  I missed the photo, but Ben had been soaked when the the outlet pipe had become detached from the pump.

I think Ben had been hoping for a little sympathy, but as I'm sure you're all aware by now,  the steam loco dept is a complete stranger to that.

And finally, one last visiting attraction from the gala was still to be found down at Winchcombe.  Having not had the opportunity to take a look at the traction engines during the gala, it was nice to be able to see one of them close up.